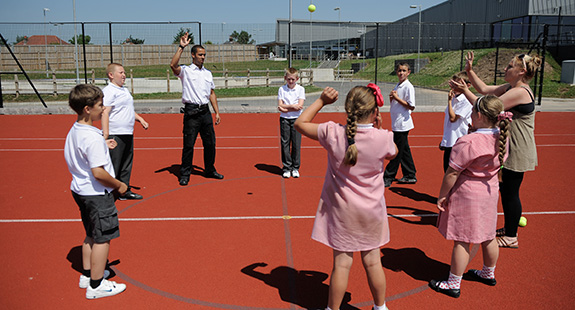 PE & School Sport Premium
£300 million of funding announced for primary school sport
On 16th March 2013, the Government announced that it is providing funding of £150 million per annum for academic years 2013/14 and 2014/15 to provide new, substantial primary school sport funding.  This funding is being jointly provided by the Departments for Education, Health and Culture, Media and Sport, and will see money going directly to primary school headteachers to spend on improving the quality of sport and PE for all their children.  The rationale is that it will capitalise on the legacy of last summer’s Olympic Games.
The funding can only be spent on PE and sport provision in schools.

In an attempt to address concerns about the lack of expertise in PE and sport in primary schools, the announcement also included plans to introduce an initial teacher training pilot to provide primary trainees with a specialism in PE. The pilot will begin with 120 trainees, starting in September 2013.

Schools will have to spend the sport funding on improving their provision of PE and sport, but they will have the freedom to choose how they do this.   Possible uses for the funding include:

CLICK HERE for professional learning opportunities in PE and Sport

Baroness Sue Campbell, head of UK Sport and chair of the Youth Sport Trust, said that although the level of investment was welcome, it was important not to waste the funding on sports coaches “who will disappear once the money goes”. “There is an issue around the quality of provision of PE in primary schools, so I hope they will think about coming together and bringing in peripatetic expertise that will work with a family of schools to build their knowledge about the subject,” she said. “What is less sustainable is heads buying in bits of work, through specialist coaches or similar – instead of training teachers – and then that expertise disappearing when they leave.” The worst-case scenario, she added, would be if the money “just filled a gap” for two years before a new programme was brought in with a change of government.
Accountability

Schools will be able to draw on information on effective practice taken from case studies provided by the very best schools. One year on, Ofsted will carry out a survey reporting on the first year’s expenditure and its impact.   Breakdown of funding per school

How the funding will be paid

For 2013/14 and 2014/15 the sport funding will be included in the additional grant for schools (AGS) 2013-14 and 2014-15. AGS is distributed to local authorities in late September or early October each year.   The payments will cover the total funding for the academic years 1 September 2013 to 31 August 2014 and 1 September 2014 to 31 August 2015.  The allocations for each eligible school in the authority will be set out in a spreadsheet that will accompany the note on the conditions of grant for the initiatives being supported by the AGS.   Academies will receive their AGS directly from the Education Funding Agency (EFA). Eligible special schools will receive their funding directly from the Department’s special education needs and disability division.

The funding announcement was expected weeks ago, and it is reported that the delays were because of a disagreement between the Department of Health, which will provide £60 million of the funding each year and wanted the money to be ring-fenced, and the Department for Education, which will hand over £80 million and wanted heads to decide how to spend the cash. The DoH won the argument!  School PE and Sport funding now joins the Pupil Premium in schools accounting for how the monies have been spent